While there weren’t a huge amount of celebs tying the knot this year (compared to last year’s bumper crop of familiar fashionistas anyway) there were some incredible celebrity wedding dresses on the aisle none the less. From Sophia Vergara’s incredible Zuhair Murad that was utter perfection to socialite Nicky Hilton’s regal Valentino there was no short of style from the ‘slebs.Of course we had a couple of Big Days from A-listers that we’re sure were spectacular, but keeping it classy have been kept under wraps thus far; Jennifer Aniston married beau Justin Theroux in their Bel Air home in August in a day cunningly disguised as a birthday celebration, Mila Kunas and Ashton Kutcher wed in secret during the summer and the beautiful Amy Adams married her long term fiancé (they were engaged for seven years) in an intimate wedding in early May. So without further adieu, we present our pick of the most beautiful celebrity dresses we’ve seen in 2015. 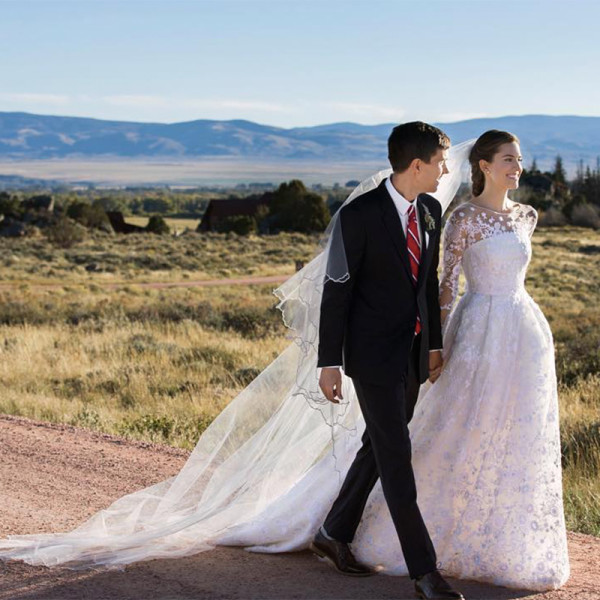 Girls actress Allison Williams married her long term love Ricky Van Veen in the quintessential American ranch wedding in Wyoming in one of our favourite gowns of the year. The bride’s stunning Oscar de la Renta was classy and modern, the traditional ballgown silhouette brought up to date with the most unusual lace and a fabulous sheer neckline. Oh, and the ceremony was officiated by Tom Hanks btw. NBD. Utter perfection. 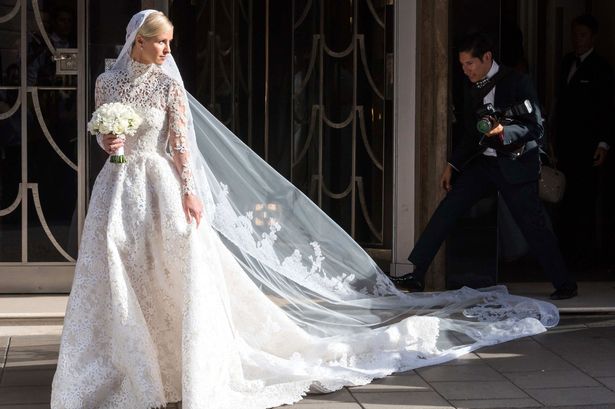 Whatever you feel about the hotel heiress and socialite, you have to agree Nicky Hilton looked every inch the modern princess when she married banking heir James Rothschild in Valentino Couture. Nicky’s full lace dress was reminiscent of Grace Kelly and Kate Middleton’s bridal gowns, featuring a beautiful full train, long lace sleeves, a high neckline and finished with a dreamy lace-trimmed veil. 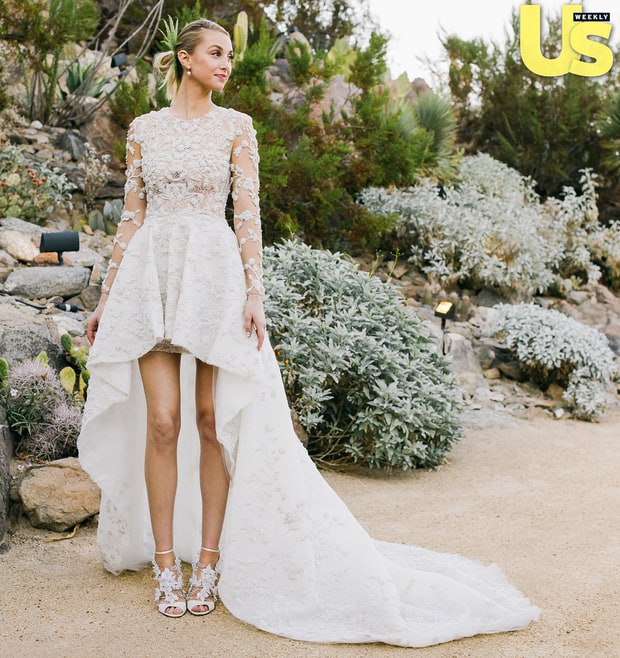 The stunning Whitney Port seriously pushed the boat out with her pretty, fun, high-low hemmed wedding dress when she married Tim Rosenman just last month in California, and frankly we’d expect nothing less from the fashionista! The dress, which was reportedly modeled on an Italian chandelier, featured a magical metre long train and was embellished with pearls and silver embroidery and was accessorised to perfection with specially made matching shoes. This one is top three of the year for us – we just love to see a non-traditional bride mixing it up on her special day! 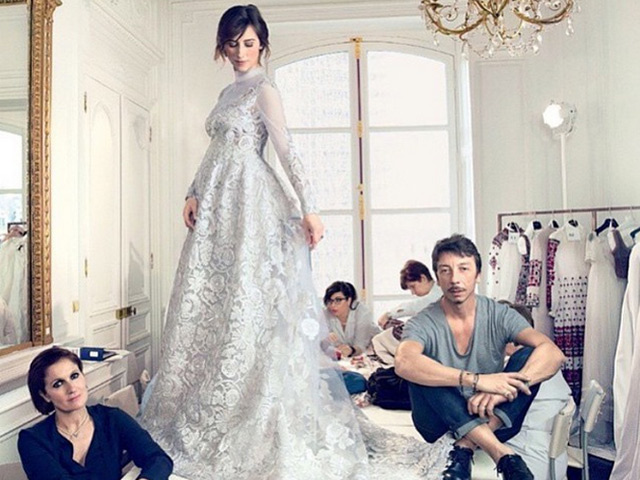 In a rather hushed wedding, director and playwright Sophie Hunter married fiancé  Benedict Cumberbatch in an incredible silver lace Valentino couture gown earlier this year. Sophie, who was pregnant with the couple’s first child when they tied the knot in March looked radiant in the photo released by the designer two months after the Big Day – and with a strict social media rule on the 12 guests we’re lucky we got to see it at all! 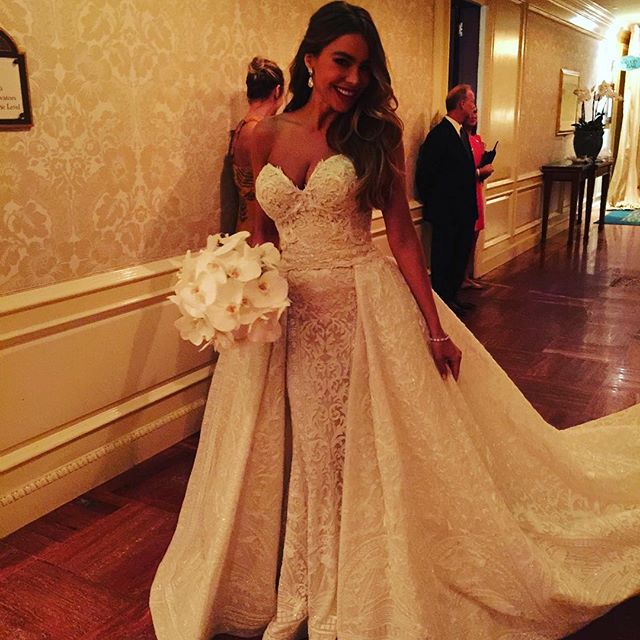 Okay, so pretty much anything you put on the ultra glam Sophie Vergara is going to look incredible, but the actress’s fabulous Zuhair Murad was a triumph of a wedding gown. Glamorous, elegant, unique and very memorable, the designer hit all the right spots with a gown that reportedly took 1,657 hours to make and featured 17lbs of pearls and and sequins. 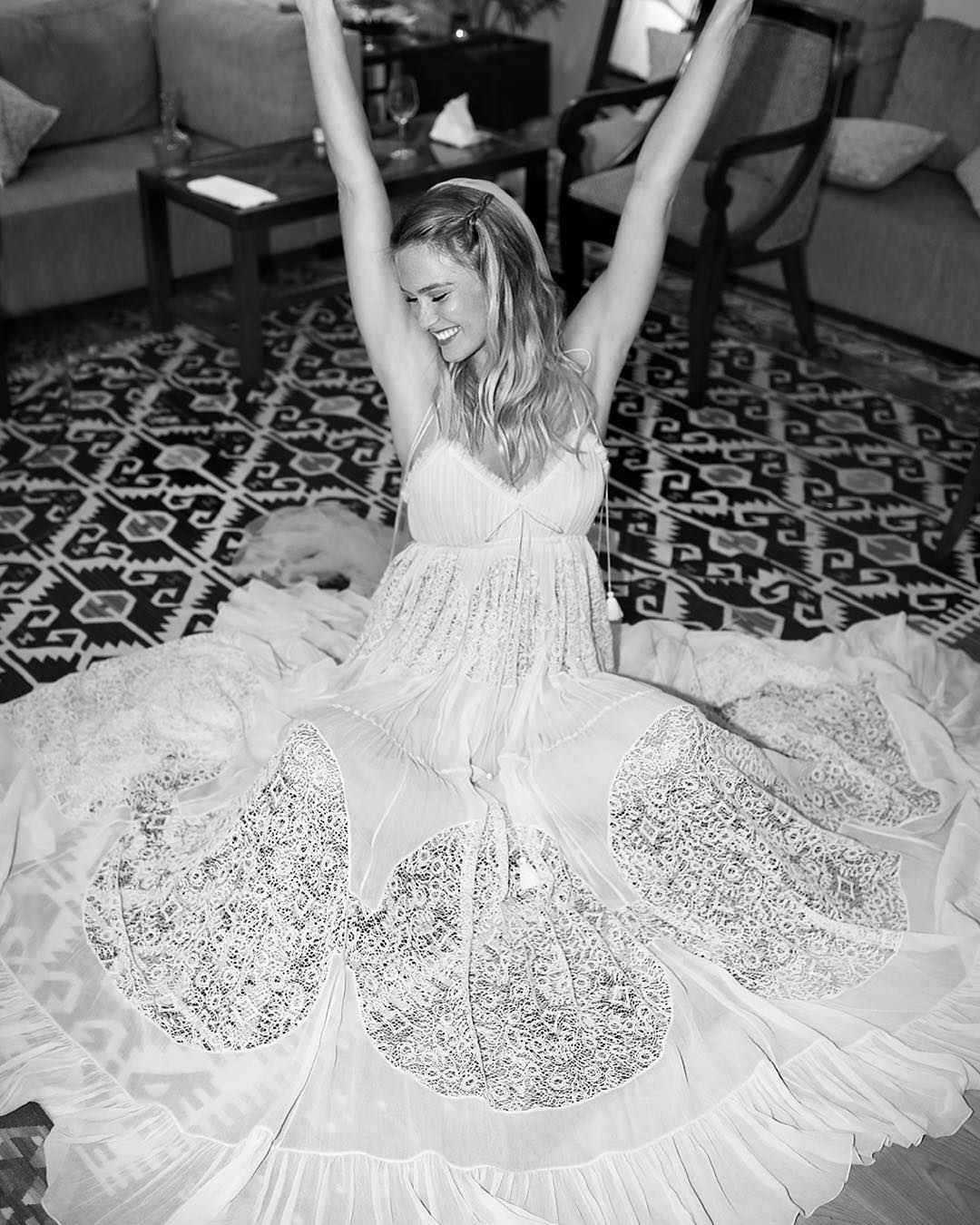 Supermodel Bar Refaeli went modern boho with a dreamy Chloe dress for her wedding in Israel this year. Simplicity was key to the sheer spaghetti strap gown, letting the radiant bride’s natural beauty shine bright. It’s a gown that looks like a dream to wear – light, soft, long and flattering, and ideal for a beauty like Bar.

Designer Phillipa Lepley has had a couple of high profile brides on her hands this year, with Geri Halliwell donning one of her stunning designs for her wedding last month, and new wife of TV presenter Declan Donnelly sporting a very classic creation of hers earlier this year. Ali’s silk princess gown featured a pretty boat neck and long train and was timeless in its simplicity. 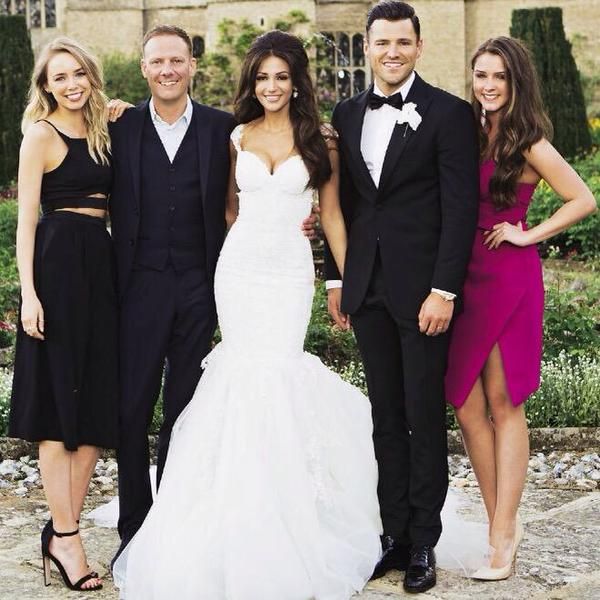 Actress Michelle Keegan wed hubby Mark Wright wearing one of our fave designers this year; Galia Lahav. Like most brides, Michelle had a wobble when she tried on her wedding dress just three months before the wedding, she wasn’t convinced it was The One – but unlike most brides she was able to call up Galia Lahav and have a whole new figure flattering gown made instead in record time! 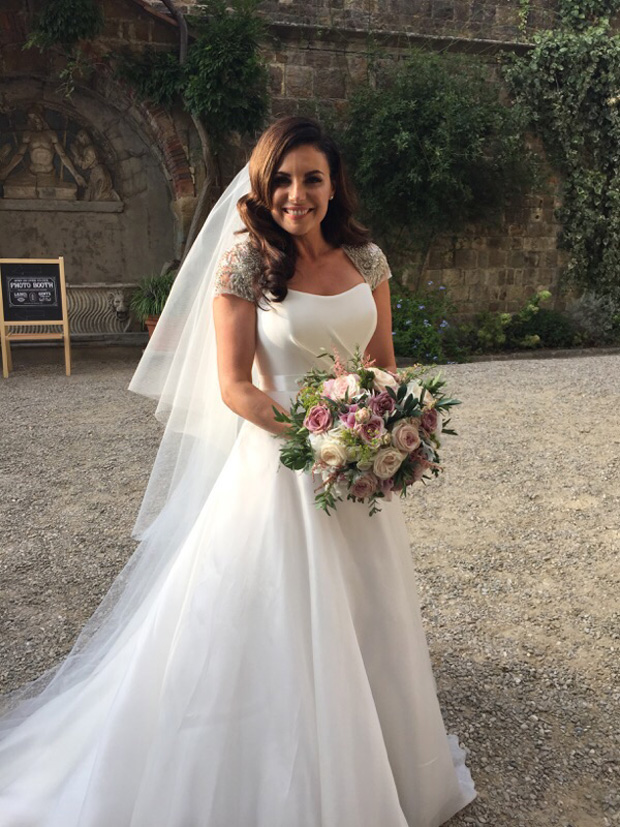 Last but not least, our very own celeb blogger Lisa Cannon tied the knot with partner Richard Keatley in Florence in September wearing an incredibly beautiful Suzanne Neville creation. Lisa worked with the UK designer in her Knightsbridge Boutique in London and in turn with Deirdre Kelly from Kadee Bride in Athlone (who stocks Suzanne’s dresses here in Ireland) “to create a bespoke dress that was both elegant and timeless.” Check out more photos of this stunning gown and see how Lisa & Richard’s Big Day unfolded in her heartfelt blog post here.

A trip down the memory lane - our top celebrity engagements 2015! Read More »