Introducing Greenery – The Pantone Colour of the Year 2017 Anyone who watched the masterpiece that was David Attenborough’s Planet Earth II last month is probably already feeling the urge to go back to nature, bring the outdoors in, and embrace the serenity of our natural surroundings. Good then, that Pantone has chosen the vibrant, natural ‘Greenery’ as their colour for 2017.Greenery is about new beginnings, it’s a natural, peaceful shade that pairs with a massive spectrum of colours and always grounds the palette. We have been massive fans of gorgeous greenery wedding palettes for a while now (indeed this greenery wedding palette is in fact one of our most popular Pinterest images ever) and are looking forward to seeing it appearing in more rustic, organic wedding decor in 2017. While we’re loving the actual shade of Pantone’s Greenery, for our greenery wedding palette we’ve gone quite literal with it, bringing in lush leaves, garlands, foliage, fern, forest greens – foliage is the new flowers. 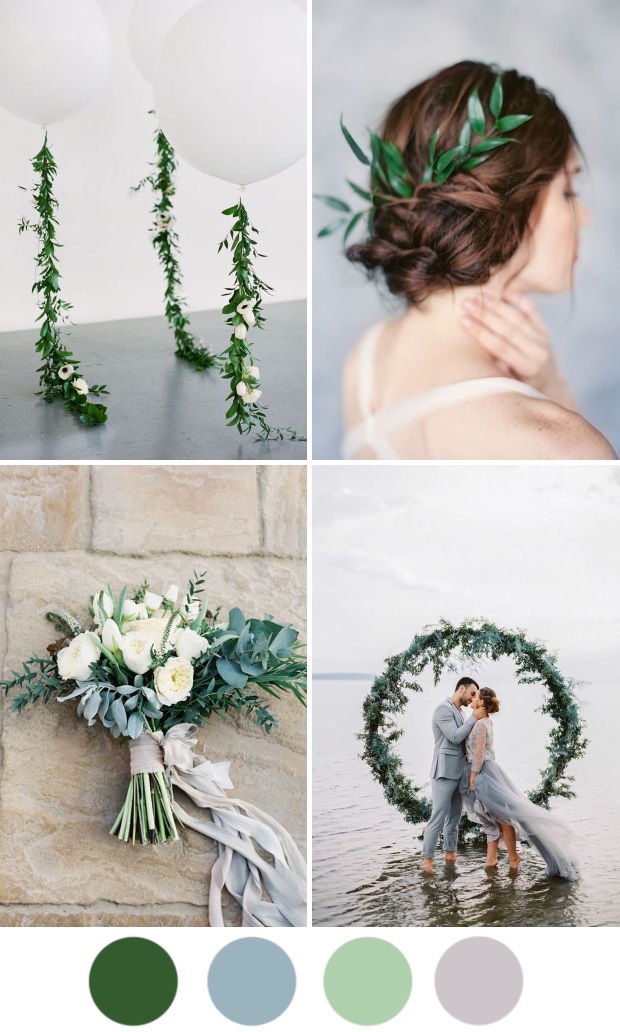 Credits: Balloons with greenery ties photo by BlogLovin.com | Greenery wedding hairpiece by Everly Alaine | Couple in sea photo via Ruffled | Fern and foliage wedding bouquet photo via weddingsparrow.co.uk“Greenery is a fresh and zesty yellow-green shade that evokes the first days of spring when nature’s greens revive, restore and renew,” says the press release for Pantone. “Illustrative of flourishing foliage and the lushness of the great outdoors, the fortifying attributes of Greenery signals consumers to take a deep breath, oxygenate and reinvigorate.”