Well helloooo, it’s been a while since I last checked in and boy have things progressed… which I’m pleased to say is a good thing! (as I wipe beads of sweat from my brow). I have said it before and I’ll say it again, planning a wedding is tough, tough work….. especially when it’s abroad. I have of course some great help with my Italian planner Rossana Sapori but still, it requires A LOT of attention to detail.

Being the worry worm that I am I’ve been quite stressed and have had many sleepless nights. I am proud to say though that I have been feverishly ticking all those boxes… I have progressed in many ways with the major things and I’m very proud to tell you that I am working hard to keep it ‘Irish’. I obviously will keep the wedding very Italian as we have all the food and venues sorted which between the ambience and style will be dishing out their own dollop of Italian fabulousness.. but I wanted to work closely with some good honest Irish established vendors and suppliers. I wanted people whom I could trust and those who can work with me here on the ground at home because besides from the language barrier (I don’t have one word of Italian!) I’m so busy with my TV day-job I’m bunched for time… having trust and guidance from Ireland has been a true godsend. What’s been so wonderful is the amount of well-wishers and people who are interested in the wedding which is a wonderful thing and finally I can disclose some of the areas in which I feel I have nailed and am excited to announce! 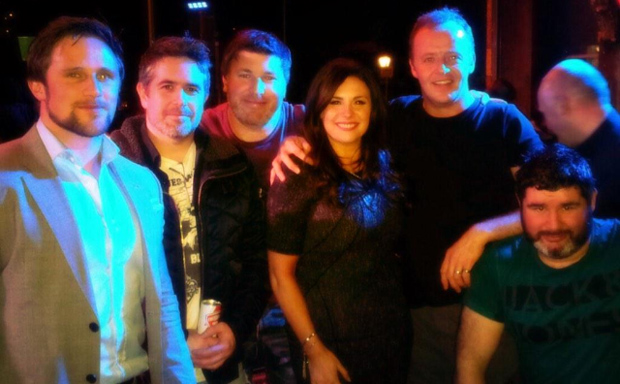 {Lisa & Richard with the lads from wedding band Harlequin}

For starters I have the most awesome band Harlequin who with Shane at the helm is set to be a fantastic night. I know they have won awards with weddingsonline and numerous others over the past 10 years which is incredible so I am overjoyed to have them with me in Italy – where they will all sleep I don’t know yet but I know we are going to work on a playlist to keep all the hipsters on the dance-floor ’til well into the wee hours! Then we asked top notch photographer John Ryan to join the team who I’m thrilled to announce. John worked on my own cousin’s wedding and indeed Nicky and Georgina Ahern and my pal Amy Huberman and Brian O’Driscoll’s wedding so I’m excited to know we are in safe hands. We had some incredible Irish photographers too in the mix which we were very sad to say goodbye to but John captured some of the most beautiful images I’d ever seen and is a lovely man to boot, so him and his lovely wife will be with us snapping away on the big day!

Flowers was a tricky one as originally I was all set to work with a wonderful Italian florist in Florence, however as costs mounted and confusion arose, I saw the value in working with an Irish florist who could talk me through all her ideas and aside from costs on the ground, she was able to provide everything I needed for the church and the reception and a lot more. I am so thrilled to have Wedding Flowers by Josephine on board who did the most wonderful pamphlet of designs for the wedding which I DIDN’T get from my Italian counterpart. She won me over…. I was a little nervous to suggest this to my planner Rosanna as I was worried I would upset her by not going Italian but delightfully she was thrilled I was working with someone from home and thought that with my busy schedule I’d be much better planning and designing with Josephine and bringing the ideas to life in Florence. Many many florists DO now travel abroad and simply cut your flowers out there. Josephine has worked in Spain and Italy before and is excited about a new challenge in Florence. I felt totally at ease and know that I’ll have the most stunning flowers on the day!

Many other wonderful things are being worked out too such as my bridesmaid dresses – I’ve decided to work with Synan O’Mahony, the Irish fashion and costume designer. We have been great friends for years so I am looking forward to seeing what visions he will come up with for the three girls over the coming months. We have picked the colour of the fabric at Roisin Cross Silks which is in Deansgrange Business Park so that’s super (phew) … I feel that that was a big deal as I’m so indecisive and was looking at swatches of fabric until I was blue in the face! Now that I found the colour and adore the fabric I’m on the way to getting the girls styled and swishafied… we just need to book in the first meeting to get designs and sketches down but we will… … I’ll find the time somehow…

So with my bridesmaids going Irish, we decided to allow Richard have his say for his groomsmen… and since it’s black tie, we’re keeping it British (Rich is from Wales) so Hackett is the label of choice! I’m a big fan of the heritage label and I know Richard adores it but I’m sworn to secrecy about his own Carrie Bradshaw moment in his suit….. but for his lads I’m thrilled it’s going to be Hackett, I know he is very excited about it! I’m beginning to think the lads are gonna outshine me… I’m STILL on the hunt for the dress… more of that later on! AAAghhhh.

So from suits to invites yes… I am proud to say we again are keeping it Irish and working with the sweetest woman in the world Ailbhe from ‘Ink Pretty‘ in Dublin.. I’ve been bold and blown the budget on Vera Wang invites but I’ve always loved stationery. Even as a little girl I would collect tons of it and write little notes to my Mum and friends, so needless to say after much tugging, toing and froing with Richard on this one, I got the pretty ones I loved. I understand when people say ‘if it’s important to you then it’s important to you’ so I have followed my heart on as many things as I can for the wedding and pulled back where necessary, things that have been important to me have taken precedence, not without a few battles along the way!! Richard is the accountant and has blown a head-gasket on a few things but pretty much we see eye to eye! Pretty much…. Ha.

So finally the one thing I’m getting very excited about is my cake. Tracy Desmond from ‘Trace of Cakes’ in Ballincollig in Cork is going to be driving a cake over from Cork.. yes utter madness I know but Tracy has become a good friend and we have seen some of her incredible designs and stunning cake ideas over this past 18 months and this is possibly the real Kim K moment as we are gonna do similar and have a few fabulous tiers… there is a Houdini trick to travelling across the water with so many tiers but Tracy has a plan and I’m very excited, Richard adores cake, any kind of cake so we loved the idea of bringing a traditional cake over and making it our own. I won’t say anymore as I’ll spoil the surprise but let’s just say it’s going to be the icing on the cake! Ha. 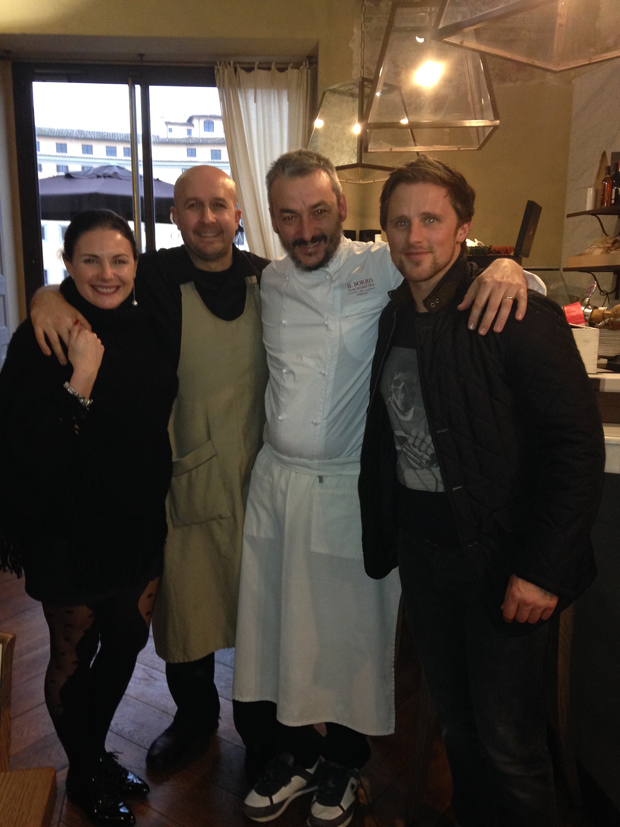 {Lisa & Richard with the guys from Il Borro Restaurant in Florence}

I am of course incorporating some Italian elements too – I really cannot wait for the guests to try the brunch I’ve organised. It was a real fluke that Richard and I managed to stumble across this place when we were last in Florence but Il Borro is probably one of the best restaurants in town and its manager Fabio is the nicest man. We sampled some traditional Italian home cooked hearty food and we decided there and then ‘cause it was so good that our guests were gonna eat there one way or the other, so the day after the wedding we are going to gorge on Fabio’s delights… great hangover brunch and apart from the fact he’s lovely and the food is incredible, it’s part of the Salvatore Ferragamo Fashion dynasty so not bad eh?… I know my onions!!

For now I feel I have done a lot but that is only the major points, there are still addresses to get, handbags and hats to buy for family and tons of people booking accommodation left right and centre – it’s been crazy with me and Richard in the middle. I have some really incredible people around me though who are helping me along the way. Richard and I have struck up a wonderful friendship with an incredibly talented carpenter and wood magician as I call him – Ricard from Varak and Clyde in Waterford, who is THE most incredible craftsman and I have him doing some surprises for the guests and some unusual pieces for the tables. It’s amazing what beautiful things and pieces you can find in Ireland away from the norm!

Although I’m a bit worn out with all the planning I’m starting to see the light and I’m hoping I’ll have a lot of things boxed off by the beginning of August… here’s hoping! Fingers and toes crossed!! xx

Lisa Cannon is best known as a presenter on TV3's hugely popular movie show, Box Office. She blogged all about the lead up to her Big Day in Italy in September 2015.

Our celeb blogger Lisa Cannon tells us all about her healthy eating plan and asking her closest pals to be...