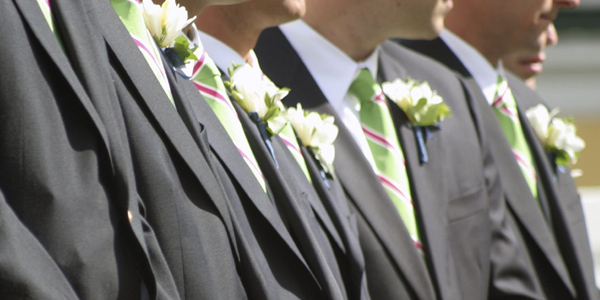 With his legal paperwork for the wedding complete, our blogging groom to be BluefishJD turned his attention what he plans to wear on the big day…

As we all know the only thing people will have their eyes on for the day of any wedding is the bride and rightly so! But the guys need to scrub up well too. We are the other half of this big day so of course we would like to look our best too! You know, just in case someone may glance at us!

Not a huge fan of formal wear at the best of times, even when it comes to things like weddings and funerals, I can safely say I’m definitely not a suit and tie kinda guy, however I do realise that this day requires a certain level of formality when it comes to choice of clothing.

Initially I was very much in the frame of mind of getting a nice modern tailored and form fitting suit yet a little on the casual side. As mentioned above I don’t tend to wear suits and don’t think I have ever worn a tie except as part of my school uniform! Even thinking back now I had a nice suit for my school graduation but no tie and again when it came to college graduation I chose a suit and style that I didn’t need a tie I don’t know, I just see them as restricting so the thoughts of a waistcoat and cravat as you can imagine scares the life out of me! And as I decided to suit up my father to co-ordinate with me and my bestman I also wanted to keep him in consideration as he too is not a fan of suits or ties I suppose the apple doesn’t fall far from the tree. I remember when he was receiving quite a prestigious GAA award (all star) he had his dickie bow in his pocket and only put it on when he needed to go on stage and it was off again before he hit the last step hahaha!

When I started browsing for something that came close to what I thought I wanted I also looked into the typical wedding suit as in tails and waistcoat and the more I saw them the more I realised that this is the one and only time I will need or have the opportunity to wear such a suit and I really wanted something special – more so for the overall aesthetics of the wedding and photograph line up so I started looking at the more traditional wedding suit hire and when I say wedding suit I refer to your typical waistcoat, cravat/tie & tails.

Being in the time we are in economically, I decided to keep my shopping local and checked out a number of men’s formal wear and wedding suit hire places around town and I have to say I was delighted with the variety in styles, colours and patterns and although I’m still not gone on the cravat, or ties for that matter, I have managed to come across a really cool punchy tie that really sparks my suit off. In my own opinion I find the cravats a little stuffy or old school and think my choice of modern tie sits very well with my choice of suit. My main reason for initially being against the wedding suit was the length of coat and tails as I’m not the tallest guy in the class and felt that these (tails) would shorten me even more! But thankfully upon airing my fear of the tails with the sales assistant he guided me towards the curved half tail coat which actually extenuated my height rather than make me look smaller so I was happy out!

Having being left to sort out the suits myself as in choose colour, style etc etc I described to Bluefish Belle my choice and showed her a pic of what I was thinking of and she thought they were really cool, formal but just that little bit different which is something I was aiming for as we had been at two weddings where all the guys in both bridal parties wore the same suits (and I can safely say they were from the same shop) and it seemed as if we were at the same wedding – so having that something different appealed to me.

So with an idea of what I wanted it was time to get my best man and dad together for a fitting. Having just one best man is great as it rules out the hassel of trying to differentiate the groomsmen and myself, so I have opted (after some helpful advice from the missies on this forum) that all three of us will be suited and booted in the same style suit with half tails, the same waistcoat and same tie and I will use the buttonhole just to make it a little different, as going on one missies advice – although it is only a small detail change, having different buttonholes will make a huge difference and let’s face it if there is anybody there on the day that doesn’t know I am the groom well then they shouldn’t be there!

We had a little panic on the day we went to get fitted, as the two lads were getting changed I was with the owner who was taking my chosen waistcoat option off the mannequin, when all of a sudden he stopped, cursed and said I just had a bad feeling! I knew it, nothing can be easy, as he went back up the shop mumbling about discontinued line… out of stock… I just knew it – the one suit that was different and I personally hadn’t seen anywhere was now not going to be available! Out he pulls a letter he had just received that morning from their supplier outlining selected waistcoats that they were discontinuing and wouldn’t ya know my choice was to be one of the swatches to be taken out of the sample book! Initial dread set in as there was nothing else there that had jumped out at me. Thankfully as he re-read the letter we found out that as long as the order for any of the products that were to be discontinued was placed before the 1st of March we would be fine relief! We got back to the job in hand of both getting fitted and measured and I have to say I was delighted with my choice to go for the more traditional wedding tails type suits as together we all just gelled and look really well standing there in line and hey we may even steal more than a glance now from the guests so best get my haircut and have a good Turkish shave booked as well!

As BluefishJD wants a different buttonhole to his best man and his father, we thought we’d see what we could find for him. We wonder will he choose anything like these 🙂

It's all systems go for our Irish blogging groom to be. With just a month left before he ties the...