If you like it, put a ring on it! BluefishJD’s Wedding Planning Diary 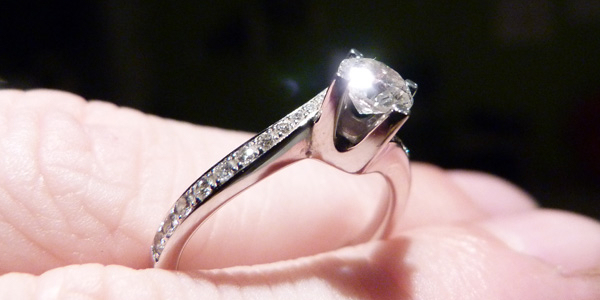 Our regular blogger BluefishJD shares his insight into wedding planning from a groom’s perspective. This week, it’s all about the engagement – how he chose the perfect ring, and his New Year’s Eve proposal story…

It started on a whim… ring shopping that is. Knowing Bluefish Belle was the ONE was clear in my mind from quite early in our relationship and I had thought about it – proposing that is but no definite timeline so to speak. It was a typical Saturday in July (2010) when I decided to wander into a local jewellers for a gander, just to see some rings, get an idea of prices etc. It was funny though as I stepped over that shop’s threshold I knew this was what I wanted and couldn’t wait to start looking. I was taken to a private room where the sales assistant started talking gold, white gold, cuts, clarity all initially going over my head but I nodded pretending I knew something.

Knowing Bluefish Belle’s taste from previous jewllery gifts I had gotten her (no rings I might add!) I knew straight away I wanted something in white gold but not decided on stones or the amount of them or a real budget in place to be honest you hear things like, spend a months wage but to be honest I think it has to be something realistic that you can afford and I also think in the end no matter what the cost she is going to love it because it came from you. Bluefish Belle is still unaware to this day of the actual cost or worth of her ring, initially she thought a couple of hundred god bless her and even at that, too much, so I decided never to tell her as she’d kill me!

As the jeweller pulled out the third selection of rings, there it was, I knew instantly. I picked it up and just knew it was to be the ring that I would ask Bluefish Belle to marry me with. It was a solitaire diamond (0.81carat), on white gold with princess cut diamonds (making up the rest of the overall total 1carat) along the band, it was just perfect and of course very sparkly. Like always, I led with my heart and it was only after I had decided yes (in my head) this is the ring that I found out the price! Shock was an understatment, let’s just say more like 2 months’ wage but I just knew it was the one and knowing we wouldn’t be having a huge wedding we did talk about these things from time to time I wanted to give her that something extra special and knowing I had time to pay it off before I would propose I went with it.

There, it was done in one foul swoop, on just a notion I had picked the ring. In the following weeks I returned regularly to make sure it was the one and started doing my homework on engagement rings, as in, the 4 Cs, diamond worth etc. etc. so I did do it a bit backwards but I still knew that it was the ring. 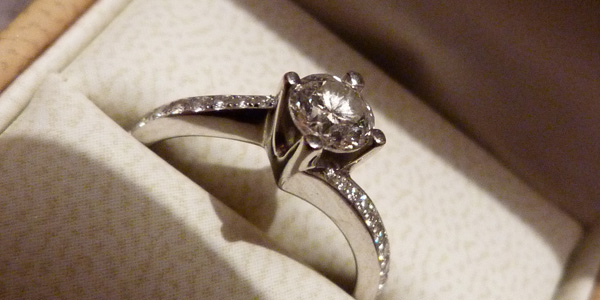 Having chosen the ring the next obstacle was to get the right ring size! Challenging was not the word due to work Bluefish Belle doesn’t wear rings after numerous tries of directing coversation to rings in general and sizes etc. it dawned on me that one holiday abroad her sister had bought her a properly fitted ring which she did wear from time to time, so the hunt was on for that ring… upon finding it I brought it the jewellers for a fitting then came another obstacle she didn’t wear this ring on her wedding finger. So we guessed and the jeweller was happy to resize after the event if need be.

The Lead Up To The Proposal

We had already planned to spend Christmas (2010) with her family in Poland so I chose New Year’s Eve as the proposal date. It gave me time to pay off the ring over the next couple of months and I thought it would be nice as she’d have all her family around her due to the traditions on NYE in Poland with a big dinner and the all important fireworks one key element in my proposal plan that I would not have been able to get over here!

Another thing was the guaranteed snow but wouldn’t know, there Ireland goes and has its largest fall of snow and severest winter in recent history which caused the first major upset in project proposal  due to the heavy snow fall and ice here our flight got cancelled tears a plenty as you can imagine as it was to be her first Christmas home since she arrived in Ireland 5 years ago, she was distraught and all I could do was console her, but (not to be selfish) inside I could see all my well laid plans NYE, Poland, a snowy field, just us under cascading fireworks perfect! just crumble and burn. After huge delays and typical airport Christmas chaos we managed to get out and get to the nearest McDonald’s (due to all the cancellations and people trying to re-book their flights the Airport internet server was down so McDonald’s in Phibsborough was the nearest I could think of with free WiFi) to rebook our flights. Unfortunately all flights before Christmas Day were gone but thankfully we managed to get tickets for the 27th of December – project proposal was back in action. Second time lucky despite heavy snow again we managed to take off this time and on our way to Poland.

New Year’s Eve couldn’t come quick enough for me – I was like a child knowing that that night was gonna change both our lives… for the better. Despite a slow pick up from her I had tried to get her out on her own before midnight as I knew everyone would be out for the main fireworks at 12, but she knocked it, saying to wait until later etc. etc., tried again and she said “ya and we will bring the kids (my future nieces and nephews) for a walk” Finally the clock struck 12 and we were all out all the while I had the ring hidden in a pair of socks in my hand luggage since arriving (and throughout the 6 day plane delay back home) now discretly shoved into my pocket awaiting the right moment!

As the family and other guests started to return into the house I pulled her back to let them go ahead I had my fireworks (with some help) all set to go she had no clue. As we set them off I went down on bended knee and told her how much I loved her, but more importantly those all important words. She looked at me surprise, shock, is this really happening? flashed across her face  – whilst I in the mean time was slowly getting frozen to the ground via my knee. I repeated “Will you marry me?”. Tears came to her eyes and “yes, yes” from her lips. Both of us overjoyed we had a little celebration of our own with leftover champagne from the earlier fireworks before rushing in to tell all!

Upon arriving back in Ireland we relaxed and took in all that was this special time at the start of our engagment and within weeks we started to talk dates and where we should have it, here or Poland, all of which I think is best left for another day, another post…